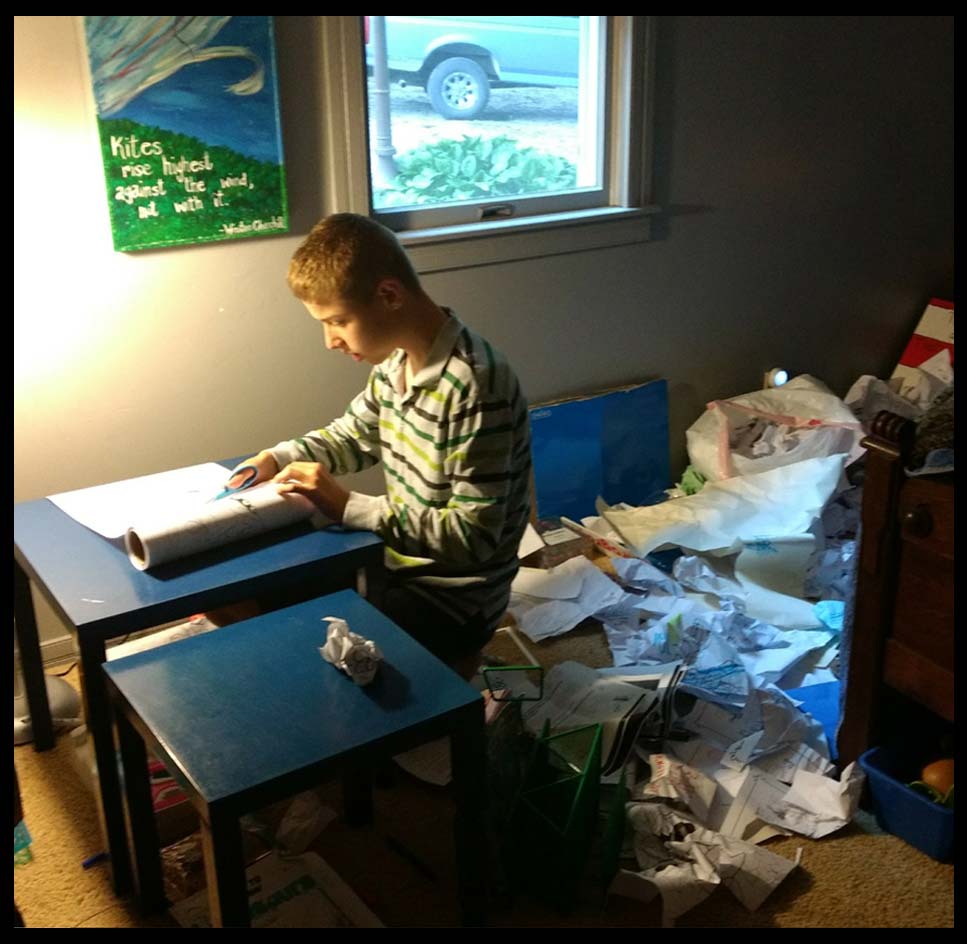 Loving him is easy, Autism is hard

Loving him is easy, autism is hard. There are no easy solutions and in our instantaneous culture that is a bitter pill to swallow. I want him talking. I want him sleeping. I want him playing with his siblings. I want him reading. I want him laughing and telling jokes. I want him sitting at the dinner table telling us about his day. I want us to run errands without a meltdown. I want to go to a movie or to church and I not have to strategize an emergency exit, due to disruptive behaviors.

Often parenting a special needs kid is double or triple the work and it is never ending. It’s continual. It’s unyielding. It’s constant. It’s endless. It’s perpetual. It’s relentless. Severe autism is a complex, perplexing condition and you got to be on your “A” game at all times, because the distorted behaviors are never ending and if you don’t stay on top of things…you soon are left with a big mess.

Ben used to waste so much paper. If he made a mistake he couldn’t use the back side or cut the paper in half. It had to be a completely new sheet of paper.

He elopes without a sound or reason. He is indifferent to any kind of discipline used, because his brain can’t remember or process much of what you say or expect from him. Special needs parents are often frozen in time and simply survive or fail completely on their own efforts.

I don’t blame the parents who are just going through the motions. I was once that parent. In 2014, I can remember sitting through an IEP meeting and just thinking, “If these therapists and teachers can’t get my kid to behave or learn, how can I? I mean we have been doing therapies for 9 years and I’m busting my butt, but his behaviors aren’t improving and he is only getting older. He is 11 years old. He is addicted to that iPad. He has zero internal motivation. We have been conditioned to bribe him with a reward to get him to do the simplest of things. It’s quite exhausting and nothing is improving.

I often think of the bible story of some of the disciples spending all night fishing. The disciples were exhausted, hungry, and defeated come morning. They had been fishing all night and had nothing to show for all their efforts. Jesus stands on the shore, but the disciples do not realize that it was Jesus. He calls out to them, “Friends, haven’t you any fish?” “No”, they answered. He said, “Throw your net on the right side of the boat and you will find some.” John 21:6

Can you imagine what the disciples were thinking. They have been fishing all night and somehow if they throw the net on the right side of the boat there will be fish? Can you imagine how annoyed, combative, and argumentative the disciples must have been, but when they do as they were told, they were unable to haul the net in, because of the large amount of fish! There were so many fish that the other disciples came towards the boat to help. Even with all those fish, the net didn’t break.

If you are a special needs parent and your “net” is empty, it’s time to throw your net out on the right side of the boat. God wants to fill your net, but perhaps he wants you to take a more active role, to reach outside your comfort zone, to trust, and as the net fills up, your teachers, aides, therapists, family, and friends all come to help and pull the net in, and no matter the amount of responsibilities the net won’t break. God will equip you.

I can think of nothing more, that would please God, than for a family and the community to rally behind a person who has a hurt brain and follow God’s design of brain development. So, what is God’s design and why haven’t we heard about this clinic or programs?

Perhaps you haven’t heard about the Family Hope Center because it has such a very unique approach and doesn’t align completely with conventional medicine. Conventional medicine’s current stance is to manage and cope. Conventional medicine wants to be efficient and get you in and out of the office in a timely manner. A parent can’t be educated within those time restraints. Parents need more empowerment. We need more guidance in how to set up a home environment to stimulate and nourish the brain. The Family Hope Center provides that service, you can research more about it at www.familyhopecenter.com

A very important difference from Family Hope and conventional medicine is the focus on physiological growth to wellness. We have to get our kid’s physiology at its best, which requires getting oxygen to the brain throughout the day, utilizing nutrient dense foods, and calming the sensory pathways. It also requires organizing the lower brain via crawling on the belly and creeping on the hands and knees. These movements develop the auditory and language pathways. It develops the ability to understand abstract concepts such a time, space, and sequence.

When the brain is organized, it can create, empathize, love, build, plan, anticipate, etc. Developing the brain is surprisingly a concise, systematic, and rewarding experience, because frankly, God is an absolute genius. God has engineered the brain to be rebuilt and you begin by building the brain from the bottom-up. Ben has achieved so many things by following a comprehensive, systematic approach to developing his brain.

Talking, problem-solving, listening, following directions are extremely challenging when a brain is hurt. One of my main concerns was Ben’s lack of internal motivation. Which is the motivation to look nice, have a clean shirt, take a shower, tie your shoes, etc. I wanted Ben to want that for himself, not for a token or a reward. Slowly but surely, bit by bit all of those goals were achieved because we improved Ben’s physiology and had a comprehensive plan to develop the brain.

(The next few blog posts I will go into more detail on how Ben’s programs improve his physiology. Each blog post will explain a bit on his respiratory, nutrition, sensory, and brain organizing programs, and their role in developing the brain.)