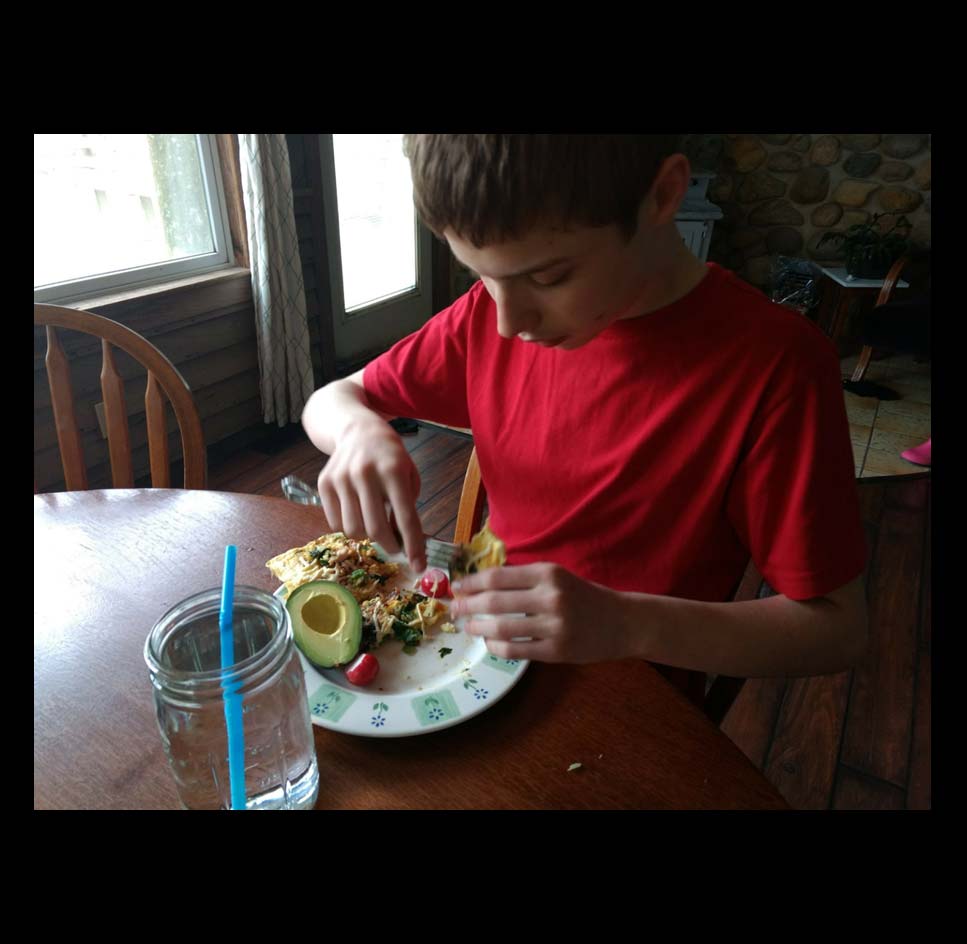 How is it possible for an innocent green pea to invoke such a ghastly, volcanic gag reflex? Why does he eat such bland foods? Why does he tend to eat only orange foods, but God forbid eat an actual orange? Why does it matter what he eats?

Kids being picky eaters isn’t a new challenge to parenting. For generations it has been a very common challenge, but even after generations of having this problem the only strategies I was taught was: He will eat when he is hungry. Offer him a little bit at a time. Reward him with some food he likes after trying a new food.

It’s almost 2020 and I can’t get over how limited and ineffective the strategies parents are given to get kids to accept new foods! It is so frustrating as a parent to have such doomed to fail strategies because they never target the root of the problem.

When I learned of the root cause for the pickiness and learned the strategies that resolve the gut issues and his distorted sensory systems, we started to be successful at getting Ben to eat vegetables and eat a nutrient dense diet.

Why does it matter that Ben eats vegetables and has a nutrient dense diet? Lots of kids do fine eating a very limited diet that lack in nutrients.

It matters because our goal isn’t to just survive, but to thrive.

Our goal is to achieve a higher level of physiological wellness.

Our goal is neuroplasticity.

In order to achieve neuroplasticity, Ben’s cells need to continuously work at their highest level of capacity for his body and brain to make the necessary connections to develop better communication within the cells.

In order for cells to repair or renew themselves, they need nourishment. Just like a plant struggling to flourish, once you start revitalizing the soil, you get robust growth.

I needed Ben to eat a wide variety of nutrient dense foods so his brain and body had the energy to rebuild the connections that were either lost or never connected.

First on the list to enhance, was Ben’s sense of smell. A simple smell program! So simple, but oh so very powerful in getting the brain more organized in how it processes its environment.

Ben had significant issues with his olfactory pathway. Ben had no idea what a good or a bad smell was. His brain was so disorganized.

Ben would eat dog food. Ben would put pennies in his mouth. Ben would be completely indifferent to having poop on his hand, because he couldn’t smell it. Ben would lick EVERYTHING, because he had NO sense of smell and for a toddler-preschooler-elementary student experiencing the world he did what he could to make sense of his environment!

For 11 years I had no idea Ben had no sense of smell. We had worked with early intervention, hospitals, universities, OT, PT, speech, behavioral therapies and not one of them said, “Your kid is licking everything or eats dog food because he can’t smell. We need to teach him how to smell and what is a good or bad smell.

WOW, that would have been helpful to know and understand why he was doing the things he was doing!

We did nothing regarding smells during Ben’s first 11 years of development, and we struggled immensely. Not just me, but the professionals working with Ben.

If I were to ask, “Smell this candle….” Ben coordinating that action with his nose, while having his brain register the smell, then categorizing it as a good or bad smell was way beyond his abilities at age 11, and is one reason ASD kids get overstimulated so easily.

We can’t modify those environments to suit their brain’s inability to process their environment. We would be far more successful if we developed the brain’s olfactory pathway to process smells appropriately along with other sensory programs.

I find it so interesting that such a simple ability to smell is so important to our brain function and when that function is compromised, you see all kinds of dysfunction that often accompanies a diagnosis of autism, Alzheimer’s, food aversions, pica, etc.

Our olfactory pathway is vital to establishing memories as well as identifying smells, accepting or rejecting foods, and coordinating with other parts of the brain.

Case in point, when I smell a hog farm, I think of my dad and then I think about how his trucks would smell, and then Dad would say, “that’s the smell of money.” I can recall the colors of trucks and the years we lived on a farm, etc.

One thought lead to another…so our sense of smell matters and can be developed to function appropriately.

Below are some YouTube clips through the years 2015-2018. Just 3 years and you will see some significant changes in brain development.

Developing the olfactory pathway is such a game changer for so many areas where ASD kids struggle. It is a simple program where I would give Ben 6 opportunities/day to smell the same 5 smells. Every week we would change the smells.

Through the past 5 years as Ben’s brain developed more, Ben would smell a smell, and be asked a question or be asked to write about something to stimulate the brain.

Via the smell program… Ben started to accept and try new foods. Ben’s memory improved, which helped with disciplining him, because he could recall the rules and consequences. Ben’s thoughts and emotions would be more organized and controlled. Ben’s ability to eat at restaurants and sit at the table with his family was a common and carefree event.

I had no idea how important developing our olfactory pathway was and how simple it can be to restore it, so other parts of the brain can be developed.

It’s time to give parents and professionals the resources and knowledge to develop brains and not manage/modify environments.

The next blog I’ll discuss why healing the gut dramatically assists in brain development.