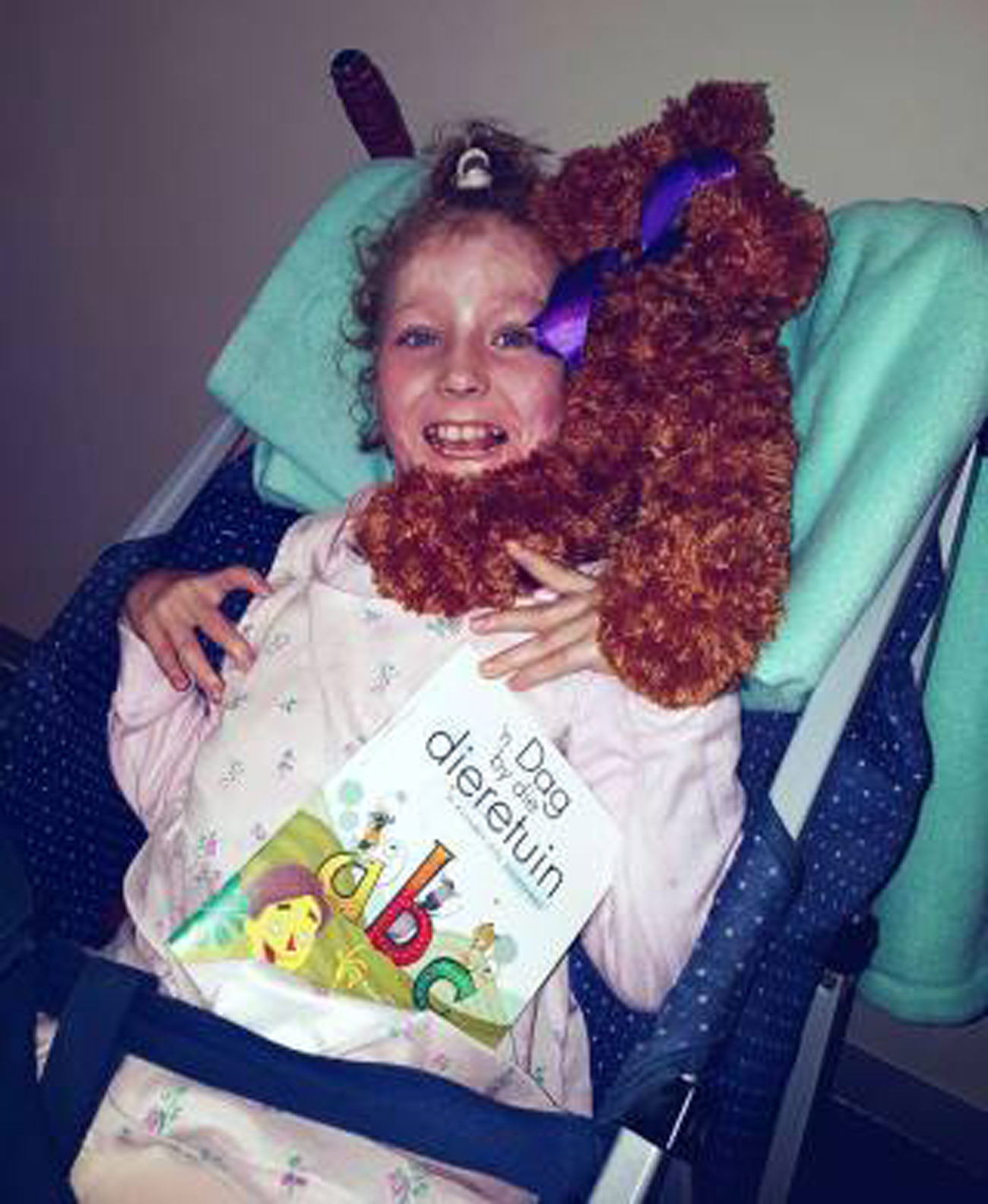 Pippie’s Mom Can Now “Dream with Her”

Pippie Kruger (8) and her mother, Anice, recently visited Maroela Media’s studio and she was spoiled with a Nataniel teddy bear and reading book from Helping Hands. Photo by Este Meyer Jansen / Maroela Media.

© Article, images, videos and all other material courtesy of Maroela Media

“There has been such a huge difference between last year this time to now. Pippie has so much more energy, she tries to do every single thing she can and she does it with so much gusto. It might not sound  like much, but she can already speak more than 100 words, she is almost crawling independently and she can sit up for a whole minute unassisted.” This is what Anice Kruger, Pippie’s mother, had to say bout the development of the beloved burn victim who is receiving treatment at Family Hope Center (FHC). Following a follow-up article on Pippie’s (8) condition in January this year by Maroela Media, one of the readers encouraged Anice to approach the center in Pennsylvania USA for more help. Anice says she learned from them how to treat Pippie holistically. “After the three days training, I walked out there feeling like a neurologist, dietician, speech-occupational- and physiotherapist all in one. I felt for the first time that I really had hope for Pippie’s brain,” says Anice. Pippie follows a strict ketogenic diet which is free of sugar and gluten and she also receives treatment in a hyperbaric chamber while inhaling pure oxygen. Pippie, then 2 years old, sustained third degree burns on over 80% of her little body when a bottle of fire lighter gel exploded during a family braai on old years eve in 2011. She miraculously survived the critical injuries and since then South Africans have been closely following the courageous little fighter’s  recovery. Pippie had to undergo intensive rehabilitation after the accident as a result of brain damage caused by five strokes and cardiac standstills. She underwent record breaking surgery in a Johannesburg hospital where her own cloned skin, grown in a laboratory in Boston, was planted over her wounds. Anice says that the FHC program easily keeps them busy between five and six hours on a good day. It is wonderful for her to see how Pippie is able to build a bond with her brother now as they are able to work together on aspects of the program. “I understand now much better how to approach my own child. I can easily see in what mood she is in and if she doesn’t want to work on a specific portion of the program today we can replace it with something else and tackle that section later.

Sanmari Smith, Anice Kruger and Este Meyer Jansen together with Pippie Kruger. The brave mommies came to share the value that they have gained from the FHC-program and the Brain Child Fund-family input. Photo by: Marius Vermaak / Maroela Media.

“Pippie is so open for every thing. She is the one guiding me through the program and so we build a stronger bond. “Now that she sees she is able to get small things right on her own, she even tries bragging a bit and that makes her want to work harder on the program. I sometimes walk into the room or lounge to find her rambling off a string of huge words one after the other – it is as if she practices in secret on her own”, says Anice proudly. Anice says that the support she has received from FHC and the people from Brain Child Fund, who introduced the program to South Africans, is of priceless value. “Every parent with a special needs child knows there are other parents out their like them, but you feel that it is your own battle which you have to fight alone. Since attending the conference it feels as though we parents understand one another’s battles better. They carry me every day and all of a sudden I am not so alone.” Anice says it is wonderful that children are assisted without placing specific etiquette’s on them. “My child is a special needs superhero in my eyes and doesn’t need to be classified under anything else. It is just astounding for me to know that your child’s brain can heal without any additional etiquette’s.” What dreams does Anice cherish for Pippie? “After the accident I realised that I can’t force my dreams on Pippie. I can’t dream for her but I can still dream with her and that is now for big stuff – that she will one day be able to walk independently, crawl, sit and talk. I would so like to be able to sit in the bath with her and just gossip – those kind of things.”
“And yes, I still think she is going to become a plastic surgeon like Dr Ridwan Mia, and who knows, maybe even still a supermodel.” The Family Hope Center offers a conference for parents and medical professionals from 9 to 11 February at the Farm Inn in Silver Lakes. Visit the Brain Child Fund facebook page or Family Hope Center website (www.familyhopecenter.com) for more information. Anice and Pippie Kruger came to visit in Maroela Media studios together with Sanmari Smith, another parent of special needs twins. They chatted with Este Meyer Jansen about the FHC program, their children’s progress and their dreams. You can also listen to a podcast of the chat in Afrikaans on this link. Read previous articles about Pippie in Maroela Media: https://maroelamedia.co.za/tag/pippie/